On the morning of this year’s Pan-Mass Challenge (PMC) bike ride, I posted a photo on Facebook of the 2016 crew as they gathered at the starting line. Fourteen smiling faces. Immediately after posting, Facebook notified me that 15 friends could be tagged in the photo. I did a double-take. Fifteen? Scanning the picture again, I realized what had happened. Facebook had counted Elizabeth. (queue the goosebumps) 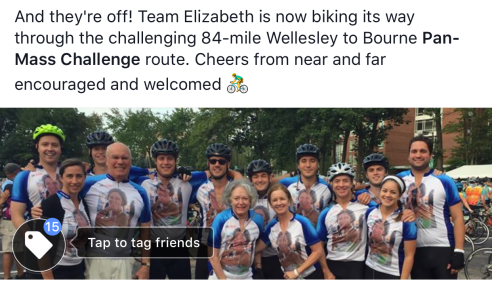 Her smiling image, sported on the front of each team member’s jersey, made her present and accounted for in the most beautiful of ways. These jerseys, worn by each year’s team since the second annual ride in 2014, were designed by Elizabeth’s son Duncan and have become an integral part of the team’s presence at the PMC. His wisdom in putting her life-size photo front and center over the heart of every rider still touches me when I see it each year.

This year marked the fourth anniversary of Elizabeth’s death and the fourth year Team Elizabeth has ridden in the PMC. In the inaugural ride, Gordon Sewall was joined by Gerry Campos and Rob Moore for the 84-mile Wellesley to Bourne route. A small but hearty band, the three riders raised $37,455. Dr. Eric Winer—Elizabeth’s physician and head of the Division of Women’s Cancers at Dana-Farber Cancer Institute—began a tradition that year that he has generously continued each year since of contributing a portion of the funds he has raised in his own PMC rides to the endowment in Elizabeth’s memory, a significant addition to the team’s fundraising each year.

In 2014 the team grew to five riders and in 2015 to six, with fundraising successes matching or exceeding the first year’s efforts. This year the team had a veritable growth explosion, fielding 14 riders, more than doubling its previous size, and raising $80,000 for the Elizabeth Alling Sewall Endowment at Dana-Farber. With this year’s support, the endowment now stands at $460,000 and is poised to surpass the half a million dollar level next year, a remarkable achievement in just four years time.

Elizabeth’s son Scott, who has ridden with the team for the past three years, was promoted to assistant captain by dad (and retiring captain) Gordon. Scott will assume full captain duties next year but, in true Elizabeth fashion, he wasted no time in putting his mark on the team, promptly recruiting nine of his close friends from Trinity College and Camp Dudley to ride this year.

Cynthia Alling, Elizabeth’s mother, came to cheer at the PMC and reported on the energy and enthusiasm that the infusion of 24-year olds brought to the team. Dubbed the “young guns” by the team elders, Cynthia said she was surprised and moved as she watched them finish their ride.  “I had expected them to cross the finish line one after another, individually,” she said. “But instead,” she paused, “they rode across the line all together, side by side.”

Every dollar raised by the team since its inception, has gone 100% to support Elizabeth’s endowment fund at Dana-Farber where she received care. The funds are specifically earmarked for research to advance the treatment of Invasive Lobular Carcinoma (ILC), the rare and aggressive form of breast cancer from which she died. [Dana-Farber’s “Ask an Expert” column from it’s June 2016 Turning Point publication gives a brief primer on ILC.]

From June 2016 issue of Turning Point published by Dana-Farber

Last year, the endowment had grown large enough to make its first grant disbursement to Dana-Farber researchers led by Dr. Winer. As the endowment grows, so too, will the annual contribution it is able to make for continued research.

A recently released Dana-Farber report provides details on specific work that Elizabeth’s fund is helping support. Dr. Winer and his team are currently embarking on a promising clinical trial targeting ILC. Having discovered that ILC, which is an estrogen receptor positive cancer, responds differently to certain hormone therapies (like tamoxifen) than do other breast cancers that are estrogen receptor positive, the researchers went on to identify the biologic traits that set ILC apart from other cancers. The upcoming clinical trail will test their findings with the goal of developing a more precisely targeted and effective treatment protocol for ILC. [from page 19 of Susan F. Smith Center for Women’s Cancers 2016 report by Dana-Farber] We look forward to keeping you apprised of the progress of this research next year.

Gordon summed up the 2016 ride best in his note to the team’s riders shortly after the event: “Sharing this experience with all of you was a true pleasure and a blessing at every level.  A signature quality that Elizabeth embodied was a seamless, natural ability to work hard on the things that matter while having fun. Your efforts modeled so many of her great attributes and this one in particular.”

Beyond the team itself, there is a wide network of supporters who cheer, contribute, send thoughts and love (if you are reading this, that means you!) without whom this endeavor would not be successful. It reminds me that perhaps the place where Elizabeth’s spirit shines brightest is in the relationships we all continue to nurture and share with one another.

The Alling-Sewall family—Gordon, Duncan & Scott, joined by Elizabeth’s mother Cynthia and her brother Greg—send their heartfelt thanks and remain enormously grateful and humbled by the support that is so generously given in Elizabeth’s memory toward treatments that will help countless others in the future.

There is no limit to love.